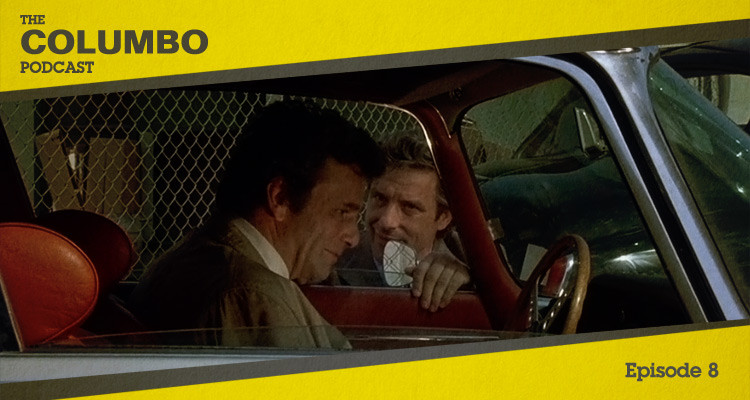 The eighth episode of Columbo was titled Ètude in Black and was the opening episode of the show’s second season. A popular musician murders his mistress to conceal their affair, intending that her death be considered a suicide. Columbo is charged with disproving that assertion and identifying the killer. In this podcast Gerry and Iain look at Columbo’s approach to the investigation and the appearance of a new regular character.

Although season 2 opened with a larger supporting cast than most of the previous year’s episodes, there were only a few roles of any depth. John Cassavetes was most prominent as Alex Benedict, conductor and killer. His sparring with Columbo was reminiscent of episodes 1 and 7 of Season 1, with the chemistry between Falk and Cassavetes essential to the success of the episode.

Also featuring were the exceptional Blythe Danner as Benedict’s put-upon wife, Janice Benedict; Myrna Loy as her affluent and influential mother; and James Olson as the emotional Paul Rifkin. The victim, Jenifer Welles, was portrayed – albeit briefly – by Emmy-nominated Anjanette Comer. There was also a brief appearance from future Oscar nominee Pat Morita, who would rise to fame, firstly in the 1970’s as Arnold in Happy Days and then in the 1980’s as Mr Miyagi in the original series of Karate Kid movies.

Although Nicholas Colasanto is credited as directing this episode, Cassavetes and Falk, friends off-screen, are often considered responsible for much of the directorial work in Ètude in Black.

During this episode we asked listeners to let us know if they could identify scenes that were adapted in the truncated version of Ètude in Black. If you have thoughts on that or any other parts of the episode then please feel free to comment below, or find us on Twitter at @columbopodcast.

Ètude in Black was released in 1972. It is 98 minutes long and originally aired on the NBC network. It can be viewed on Netflix in the United States and is available on DVD in other countries, including a comprehensive box set of all eleven seasons released by Universal.