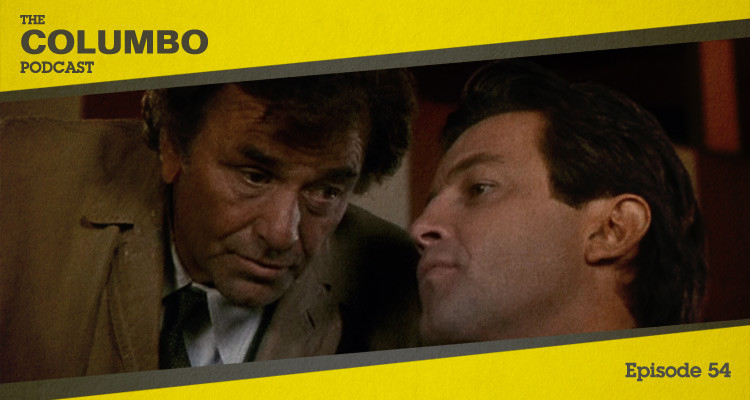 The fifty second episode of Columbo was titled Uneasy Lies the Crown and was the fifth episode of the show’s ninth season. A dentist tries to preserve his cushy lifestyle by killing his wife’s lover and framing her for the killing. In this podcast Gerry and Iain look at the twisted motivations of a selfish murderer.

The title of this episode is adapted from Shakespeare’s Henry IV Part I and there is some overlap in the theme of a disgruntled family owed a debt by the principal actor (and of course Henry was also responsible for the murder of Richard II in the play of that same name!). This time our killer is Dr Wesley Corman (James Read), the disappointing spouse to Lydia Corman (Jo Anderson). When Lydia’s threat of divorce escalates via her father – Wesley’s employer, Horace Sherwin (Paul Burke) – he takes drastic action.

Some years previously Lydia lost her first husband when she used her heart medication, Digitalis, to try and help him when he suffered a heart attack, unwittingly leading to his demise. Wesley takes credit for “saving” her following that incident and has manipulated her since: marrying her; becoming a junior partner in her father’s dental practice; using her father’s money to settle huge gambling debts; and borrowing much more besides to invest in hopeless dreams and crackpot schemes. With that lifestyle slipping away, Wesley acts. Knowing Lydia’s lover, film star Adam Evans (Marshall R. Teague), will be with her that evening, he arranges a dental appointment and places Digitalis with a slow release coating inside a crown. Later, Evans appears to die in Lydia’s arms and the case commences.

Wesley’s alibi is secured by his presence at a poker game with celebrity guests (playing themselves in this episode) Nancy Walker, Dick Sargent and Ron Cey. Lydia’s brother David (Mark Arnott) is also present and these guests comprise the episode’s primary support.

Director Alan J. Levi directed the first of his three Columbo stories and this one was particularly interested for having been written by Steven Bochco in the 1970s and rejected for the show’s original run. Having been made into an episode of McMillan and Wife (with Nancy Walker!), it was revived for Season 9 with no additional writing credits supplied.

If you have thoughts on any aspect of Uneasy Lies the Crown, please share them below, or find us on Twitter at @columbopodcast.

Uneasy Lies the Crown was released in 1990. It is 98 minutes long and originally aired on the ABC network. This episode is not available on Netflix, but can be found on the Season 9 or complete collection DVD box sets from Universal.