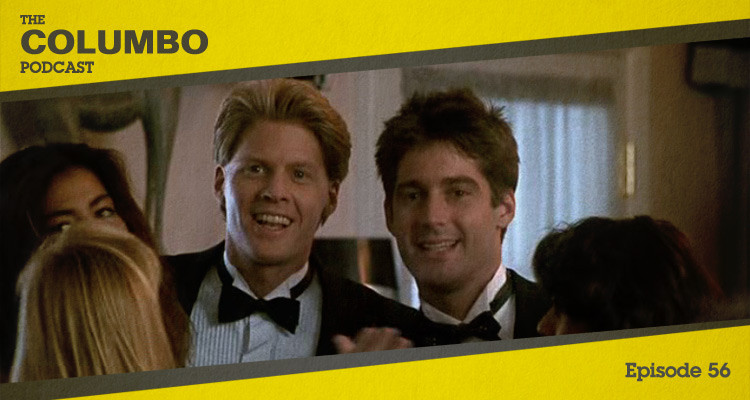 The fifty fourth episode of Columbo was titled Columbo Goes to College and was the first episode of the show’s tenth season. A pair of privileged college students kill their professor to avoid punishment for cheating on an exam. In this podcast Gerry and Iain look at a particularly arrogant couple of killers and the welcome return of a much-loved face.

Cooper Redman (Gary Hershberger) clearly enjoys being the big man on campus, but when a third girl in eighteen months has an abortion following a night with him, his father reaches the end of his tether and threatens to cut him off if there is one more screw-up. Meanwhile his friend Justin Rowe (Stephen Caffrey) has managed to copy the questions for an upcoming exam. When their professor, D.E. Rusk (James Sutorius) discovers the transgression it seems both boys could be facing the end of their respective academic careers. Their solution is to kill the professor and hope blame falls on the mob; his ex-lover Mrs Clark (Katherine Cannon); or her husband, the aptly named Coach Not-Appearing-In-This-Film.

Robert Culp returns to the show as Rowe’s father, the university’s legal counsel, while William Lucking and Jim Antonio play Dominic and Joe Doyle – an ex-con and his brother – who are temporarily positioned as fall guys for the boys’ scheme. Bridget Hanley appears briefly as Rusk’s widow, while Maree Cheatham has her moments as Rowe’s mother.

Director E.W. Swackhamer helmed his only Columbo episode, while Jeffrey Bloom followed up the excellent Agenda for Murder by penning this script, the second of his three for the show, from a story he conceived along with Frederick King Keller – now better known for his directorial work.

If you have thoughts on any aspect of Columbo Goes to College, please share them below, or find us on Twitter at @columbopodcast.

Columbo Goes to College was released in 1990. It is 98 minutes long and originally aired on the ABC network. This episode is not available on Netflix, but can be found on the Season 10 or complete collection DVD box sets from Universal.