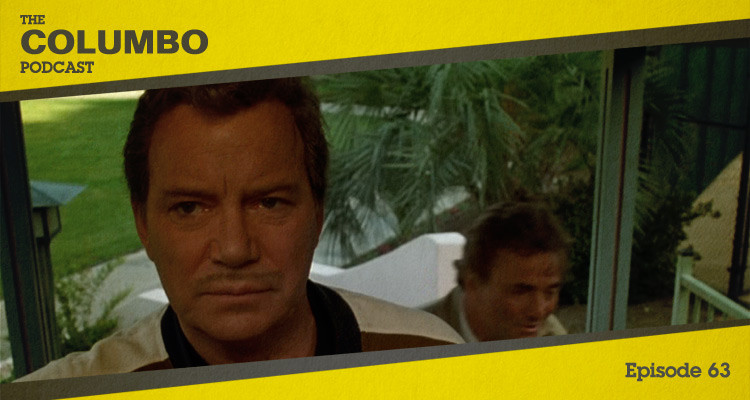 The sixty first episode of Columbo was titled Butterfly in Shades of Grey and was the second episode of the show’s twelfth season. A bombastic radio presenter reacts violently to the prospect of his daughter leaving town. In this podcast Gerry and Iain remark on a couple of returning faces.

William Shatner makes a welcome return to the show as right-wing radio host Fielding Chase. Angered by the efforts of show investigator Gerry Winters (Jack Laufer) to persuade his daughter Victoria (Molly Hagan, last seen on Murder, Smoke and Shadows) to head to New York in search of a publishing deal he shoots the younger man dead, while staging a phone call from his own home.

Another small cast participate in this episode, with Shatner and Peter Falk doing the heavy lifting. Richard Kline appears as Lou Cates, a literary agent who can help Victoria; Yorgo Constantine has a cameo as the radio station manager; Mark Lonow is a soap star and Gerry’s boyfriend, Ted Malloy; Robin Clarke appears briefly as Senator Gordon Madison; and DeeDee Ross (Beverly Leech) and her agent (Brian Markinson) dine with Fielding Chase ahead of his interview with Madison.

Dennis Dugan, who appeared as Mac Albinski in Last Salute to the Commodore returns to direct this episode, working from a script by veteran writer Peter S. Fischer (his eighth of nine shows).

If you have thoughts on any aspect of Butterfly in Shades of Grey, please share them below, or find us on Twitter at @columbopodcast.

Butterfly in Shades of Grey was released in 1994. It is 98 minutes long and originally aired on the ABC network. This episode is not available on Netflix, but can be found on the Season 10 or complete collection DVD box sets from Universal (all remaining episodes are considered ‘Season 10’ in the DVD collection).