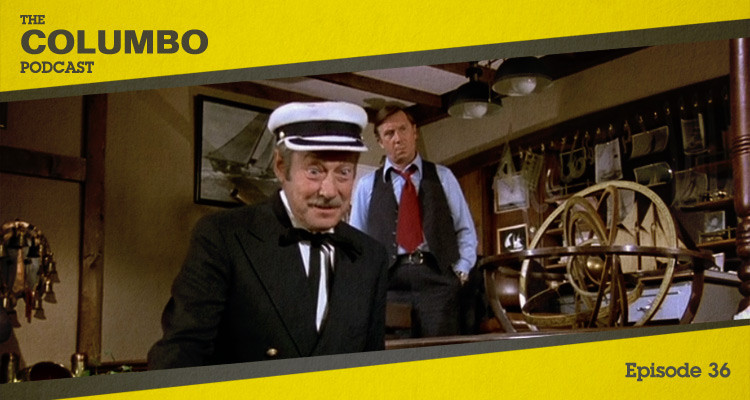 The thirty fifth episode of Columbo was titled Last Salute to the Commodore and was the highly controversial final episode of the show’s fifth season. An array of suspects are presented as the show departs from its usual format. In this podcast Gerry and Iain look at what was changed and the extent to which it helped or harmed the character of Columbo.

The episode did not follow the usual format. Dehner’s Otis Swanson, the Commodore referred to in the Episode title, was murdered near the start of the episode with the audience led to believe Vaughn’s Charles Clay was responsible. Later, however, Clay himself is murdered and suspicion falls on Diane Baker‘s Joanna Clay – daughter of Otis and wife of Charles. She is joined as a suspect by Wayne Taylor (Bryant), the Commodore’s lawyer Kittering (Hyde-White), the Commodore’s new love Lisa King (Susan Foster) and Clay’s cousin ‘Swanny’ Swanson (Draper).

In an Agatha Christie-style finale Columbo, Kramer and Dennis Dugan‘s Sgt. Theodore ‘Mac’ Albinsky gather the suspects in a single room before solving the case in front of them. As it turns out, Joanna, Kittering, Wayne and Lisa killed nobody, with Swanny responsible for both murders.

As with most of the actors, the director and writer were both returning to the show. Jackson Gillis penned seven episodes across the first three seasons, but this was his first script since then and his last for a further fourteen years. The episode was directed by Patrick McGoohan, his second stint behind the camera and perhaps his most scrutinised.

During the show we asked if anyone recalled the contemporary reaction to this episode. If you have thoughts on that or any other aspect of Last Salute to the Commodore please share them below, or find us on Twitter at @columbopodcast.

Last Salute to the Commodore was released in 1976. It is 95 minutes long and originally aired on the NBC network. It can be viewed on Netflix in the United States and is available on DVD in other countries, including a comprehensive box set of all the show’s seasons released by Universal.