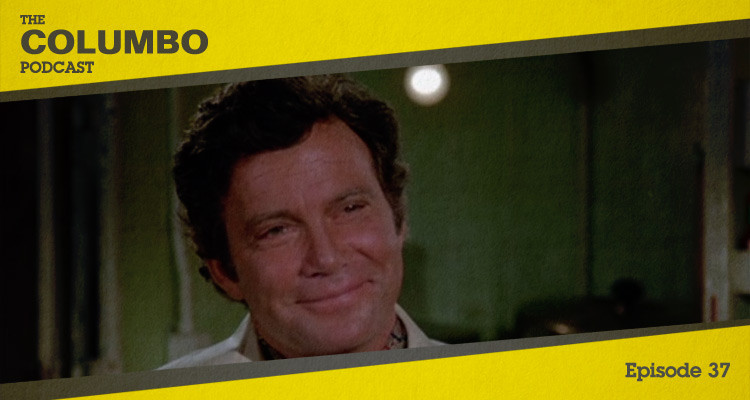 The thirty sixth episode of Columbo was titled Fade in to Murder and was the first episode of the show’s sixth season. A television star turns to murder under pressure of blackmail. In this podcast Gerry and Iain look at a fascinatingly layered story of a famous TV detective.

A smaller cast was used in this episode, compared to Season Five’s finale and it was Star Trek veteran William Shatner who had the chance to shine as we were presented a traditional head-to-head between Columbo and the killer. Shatner played Ward Fowler, television’s highest paid star for his role as Detective Lucerne, who was suffering at the hands of Clare Daley (Lola Albright). Daley’s knowledge of Fowler’s past meant she was in a position to blackmail him and she had taken advantage – pocketing half his earnings over a significant period of time.

Supporting the principal cast were Bert Remsen as Mark Davis, a friend of Fowler’s who was drugged and tricked into believing he could provide an alibi; and Alan Manson as Sid Daley, husband of Clare and another plausible suspect in the case. There was a pleasing cameo from Walter Koenig as a Sergeant Johnson, his first collaboration with Shatner since Star Trek was cancelled. (Both men had, however, appeared on (separate) episodes of Medical Center and The Virginian in the intervening period.) Timothy Carey made his third and final appearance on the show as Tony, a witness to the killing.

Fred Draper returned after portraying the killer in the previous episode, playing an extra on Fowler’s show who was fired for failing to deliver his lines correctly right at the start of the episode. This was his sixth and final Columbo appearance.

Director Bernard L. Kowalski returned for his fourth and final stint behind the camera, working with a script by Lou Shaw and Peter S. Feibleman from a story by Henry Garson. Shaw previously wrote Season Five’s A Case of Immunity, while this was Feibleman’s first involvement with the series.  This was to be Garson’s one and only contribution to Columbo and is his final recorded writing credit altogether, although he would live a further 27 years to the age of 91. He is perhaps best known for writing the 1960 Elvis Presley movie GI Blues.

If you have thoughts on any aspect of Fade in to Murder, please share them below, or find us on Twitter at @columbopodcast.

Fade in to Murder was released in 1976. It is 73 minutes long and originally aired on the NBC network. It can be viewed on Netflix in the United States and is available on DVD in other countries, including a comprehensive box set of all the show’s seasons released by Universal.