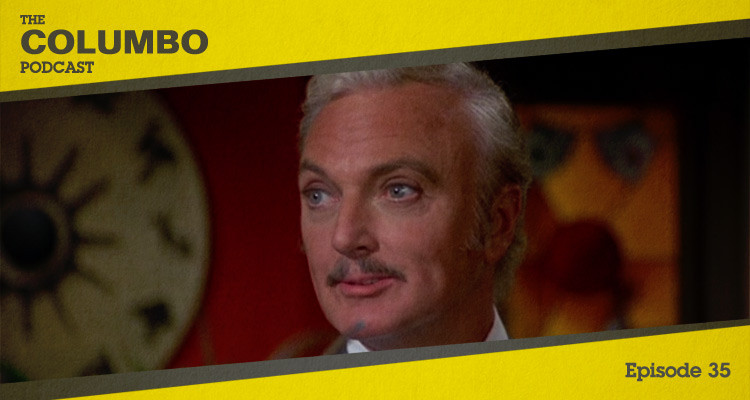 The thirty fourth episode of Columbo was titled Now You See Him and was the fifth episode of the show’s fifth season. A popular magician kills to conceal his darkest secret. In this podcast Gerry and Iain look at Columbo’s efforts to outsmart a master of illusion.

Returning for the third and final time, Jack Cassidy is our killer once more. As ‘The Great Santini’ he delivers a strong and memorable performance, portraying an arrogant culprit with a genuine belief that he’s carried out a perfect crime. Tied in to an onerous contract by manipulative club owner Jesse Jerome (Nehemiah Persoff), under threat of blackmail, Santini’s efforts to renegotiate are rebuffed. Jerome threatens to reveal Santini’s secret past as an SS officer in Nazi Germany, unaware of how vulnerable he is as the last man alive to know this about the magician.

Bob Dishy returned as Sergeant Wilson, his second and last appearance in the role, supporting Columbo in his inquiries. Important roles at the club are played by Robert Loggia (manager Harry Blandford), Cynthia Sikes (Santini’s daughter-cum-assistant Della) and George Sperdakos as Thankery; while Victor Izay made his second of three Columbo appearances as the locksmith Lassiter. Della’s boyfriend, the club singer, was played by Patrick Culliton, a magic aficionado himself, who briefly reflects on the episode here.

Perhaps the most remarkable supporting part was an uncredited role. Long-term Columbo extra Mike Lally played a retired high-wire artist who remembered Santini from the old, though post-war, days in Europe. The character is also named Mike Lally and there are a couple of complimentary lines in there for him that it’s clear the actors are enjoying.

Harvey Hart returned to direct in his fourth and – like Cassidy and Dishy – final stint behind the camera and the script was written by Michael Sloan, who did not write again for Columbo, but has gone on to have a strong career as is perhaps best known for creating The Equalizer, most recently portrayed on film by Denzel Washington.

If you have thoughts on any aspect of Now You See Him please share them below, or find us on Twitter at @columbopodcast.

Now You See Him was released in 1976. It is 85 minutes long and originally aired on the NBC network. It can be viewed on Netflix in the United States and is available on DVD in other countries, including a comprehensive box set of all the show’s seasons released by Universal.