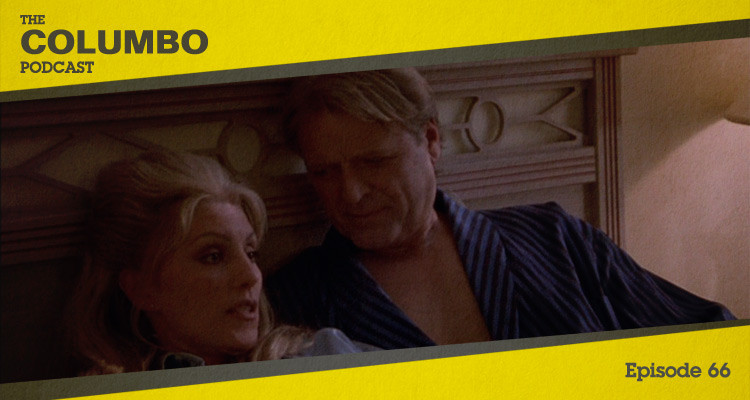 The sixty fourth episode of Columbo was titled A Trace of Murder and was the second episode of the show’s final season. Columbo is forced to look close to home for a suspect. In this podcast Gerry and Iain look at a temperamental double act.

Star of Sledge Hammer!, David Rasche, teams up with Shera Danese – finally featuring as a killer – as Patrick Kinsley and Cathleen Calvert: a pair looking to frame Calvert’s husband Clifford (Barry Corbin) for the murder of rival Howard Seltzer (Raye Birk) and live off his wealth.

Vincent McEveety found himself in the director’s chair yet again, in his final stint, working with a story by Charles Kipps.

If you have thoughts on any aspect of A Trace of Murder, please share them below, or find us on Twitter at @columbopodcast.

A Trace of Murder was released in 1997. It is 88 minutes long and originally aired on the ABC network. This episode is not available on Netflix, but can be found on the Season 10 or complete collection DVD box sets from Universal (all remaining episodes are considered ‘Season 10’ in the DVD collection).