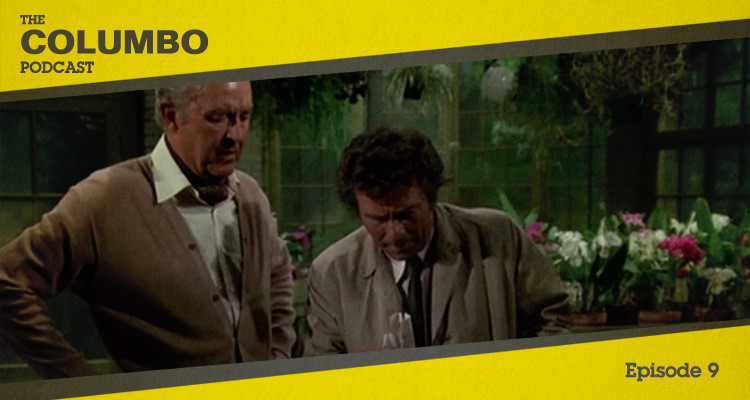 The ninth episode of Columbo was titled The Greenhouse Jungle and was the second episode of the show’s second season. A scheme to extract funds from a family Trust is turned on its head as an uncle double-crosses his nephew. Columbo has a little help for once as he tries to solve the case. In this podcast Gerry and Iain look at the highs and lows of the episode, including a return visit from one of Season One’s guest stars.

The dynamic of the Season Two opener, Ètude in Black, which focused on Columbo’s exchanges with the killer, was not repeated in The Greenhouse Jungle. There was a small amount of sparring between Columbo and Jarvis Goodland (the returning Ray Milland in a bigger role than he played in Season One’s Death Lends a Hand), but there was also focus on exchanges between Columbo and Sergeant Wilson; Jarvis and his nephew Tony; Jarvis and his nephew’s wife, Cathy; as well as Gloria West’s conversations with Cathy and Jarvis.

Sergeant Wilson was introduced as a partner for Columbo and his by-the-book style, combined with a lack of detective’s instinct, were played skilfully by Bob Dishy – perhaps better known to modern audiences for his roles in Law & Order and 2004’s Along Came Polly. Wilson’s naïvety was a boon to Milland’s killer, allowing suspicion to be cast on Sandra Smith‘s matter-of-fact Cathy Goodland – an unfaithful wife with few regrets and abundant self-belief. The work of these three actors – together with Star Trek veteran Arlene Martel as Gloria – were among the episode’s highlights.

Also featuring were William Smith – a man of many talents and many interests – as Ken Nichols; and Bradford Dillman as the ill-fated Tony Goodland. Directed by Boris Sagal in the first of his two stints behind the Columbo camera, The Greenhouse Jungle delivered an innovative twist on the typical Columbo approach.

During this episode we asked listeners for their thoughts on a number of issues, including pistol handling and which of William Smith’s achievements they’d most like on their CV. If you have thoughts on those issues or any other aspect of The Greenhouse Jungle then please feel free to comment below, or find us on Twitter at @columbopodcast.

The Greenhouse Jungle was released in 1972. It is 74 minutes long and originally aired on the NBC network. It can be viewed on Netflix in the United States and is available on DVD in other countries, including a comprehensive box set of all eleven seasons released by Universal.