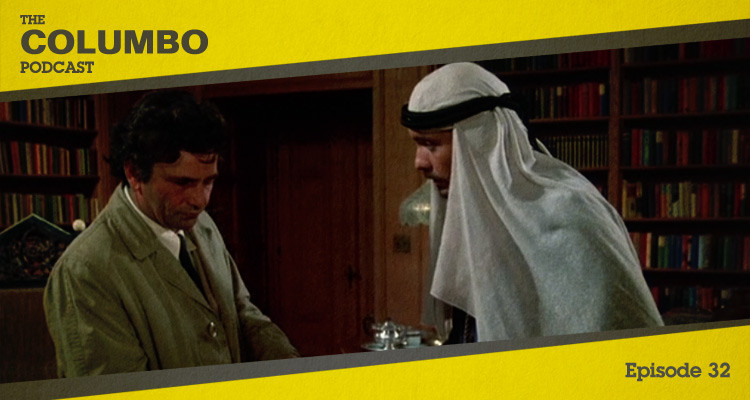 The thirty first episode of Columbo was titled A Case of Immunity and was the second episode of the show’s fifth season. Internal conflicts lead a diplomat to kill two colleagues while the US government pressures Columbo to drop the case. In this podcast Gerry and Iain look at the way Columbo builds his case and a dramatic resolution.

The versatile Hector Elizondo features as Hassan Salah, First Secretary to the Suari King, who conspires with Sal Mineo‘s Rahman Habib to murder Youssef Alafa (André Lawrence). Alafa is the Security Chief at the Suari Legation in Los Angeles and internal politics seem to be the primary motivation. Salah goes on to kill Habib as well to ensure he is not implicated in the killing of Alafa.

Brioni Farrell as Xenia, a member of staff at the Legation; and Barry Robins as the aforementioned Suari King played important supporting roles as Columbo built his own alliances. Dick Dinman‘s brief appearance as government agent Kermit Morgan was also critical in establishing the particular complications of the case

Ted Post directed in the first of his two Columbo episodes, while Lou Shaw‘s teleplay of James Menzies‘ story was also the first of two engagements on the show. By contrast, this was Menzies’ only involvement with Columbo.

If you have thoughts on any aspect of A Case of Immunity please share them below, or find us on Twitter at @columbopodcast.

A Case of Immunity was released in 1975. It is 70 minutes long and originally aired on the NBC network. It can be viewed on Netflix in the United States and is available on DVD in other countries, including a comprehensive box set of all the show’s seasons released by Universal.