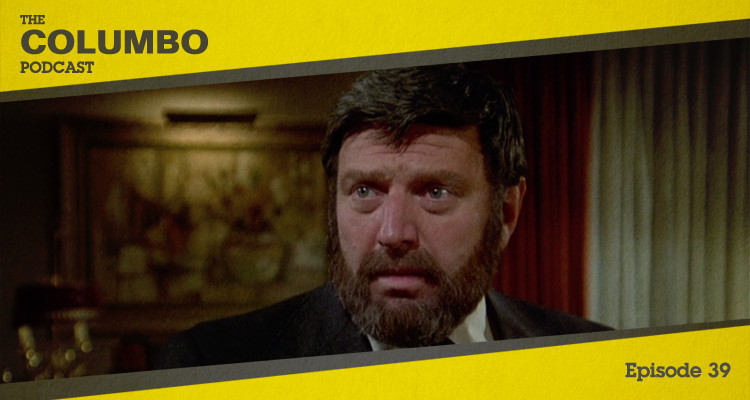 The thirty eighth episode of Columbo was titled The Bye-Bye Sky High IQ Murder Case and was the final episode of the show’s short sixth season. On the brink of exposure for embezzlement, a genius uses his ability to plot the perfect murder. In this podcast Gerry and Iain look at a contest between two highly intelligent characters.

Although not sticking to a classic head-to-head format throughout, this episode is nevertheless dominated by Peter Falk’s Columbo and Theodore Bikel as Oliver Brandt, killer of Sorrell Booke‘s Bertie Hastings. Hastings has uncovered evidence of embezzlement by Brandt, but is unaware that Brandt knows all about his investigations. When the matter comes to a head Brandt shoots Hastings dead before executing a plan, which has been prepared with precision, in order to cover his tracks.

Brandt and Hastings are members of a MENSA-style high IQ organisation called the Sigma Society. Also attending the meeting on the night of Hastings’ murder are Jason Danziger (Basil Hoffman) and Caroline Treynor (Carol Jones), amongst others. Kenneth Mars plays a new member who is proud to be accepted into the society. Additional support comes from Samantha Eggar as Brandt’s two-dimensional wife Vivian, Howard McGillin as George Camponella – an employee loyal to Brandt – and Peter Lampert in an uncredited role as Alvin Metzler, Hastings’ secretary who later becomes the target of Brandt’s ire.

Jamie Lee Curtis makes one of her earliest television appearances as a disgruntled waitress who insists Columbo purchase a new donut if he is to eat on her restaurant’s premises. Curtis, of course, follows in the footsteps of her mother, Janet Leigh, who starred as the killer in Season Five’s Forgotten Lady.

Sam Wanamaker directs the first of his two Columbo episodes, working with a script by Robert M. Young. Young did not write for Columbo before or since and is probably better known for his screenplay for 1975’s Escape to Witch Mountain.

If you have thoughts on any aspect of The Bye-Bye Sky High IQ Murder Case, please share them below, or find us on Twitter at @columbopodcast.

The Bye-Bye Sky High IQ Murder Case was released in 1977, six months after Old Fashioned Murder. It is 70 minutes long and originally aired on the NBC network. It can be viewed on Netflix in the United States and is available on DVD in other countries, including a comprehensive box set of all the show’s seasons released by Universal.