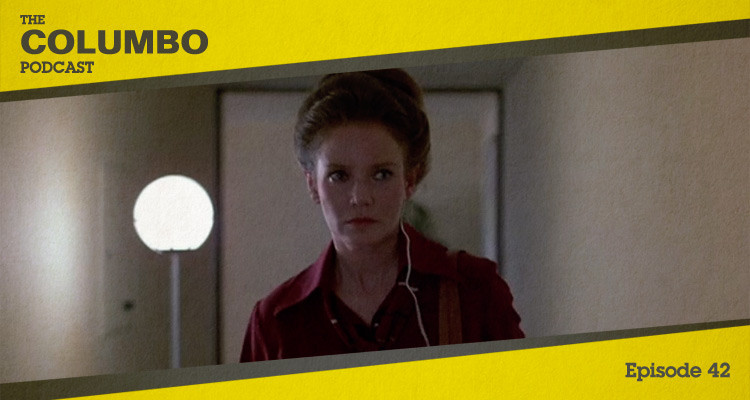 The forty first episode of Columbo was titled Make Me a Perfect Murder and was the third episode of the show’s seventh season. A television executive seeks revenge after she is betrayed by her lover. In this podcast Gerry and Iain look at an interesting episode with echoes of previous shows throughout.

Studio executives Kay Freestone (Trish Van Devere) and Mark McAndrews (Laurence Luckinbill) are involved in a secret relationship at the outset of this mystery, a pairing that Freestone believes comes with an implicit (or perhaps explicit) arrangement for each to support the other’s career. When McAndrews is promoted to the network’s New York office and refuses to either take Freestone along or to promote her into the post he is vacating, she interprets his behaviour as a betrayal and sets in motion a plot to kill him and escape suspicion.

James McEachin‘s Walter Mearhead is a projectionist, unwittingly recruited to support Freestone’s alibi, while Patrick O’Neal returns to the show, after featuring in Season One’s Blueprint for Murder, as network boss Frank Flanagan. There are other minor supporting roles, but the episode focuses heavily on Freestone and her ultimately futile efforts to escape Columbo’s suspicion.

Director James Frawley earlier helmed this season’s Try and Catch Me and would return for four future episodes. Writer Robert Blees made his only contribution to Columbo with this tale.

If you have thoughts on any aspect of Make Me a Perfect Murder, please share them below, or find us on Twitter at @columbopodcast.

Make Me a Perfect Murder was released in 1978. It is 100 minutes long and originally aired on the NBC network. It can be viewed on Netflix in the United States and is available on DVD in other countries, including a comprehensive box set of all the show’s seasons released by Universal.