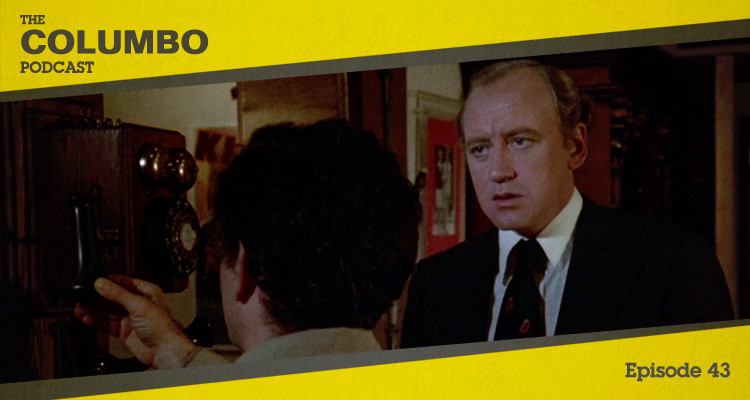 The forty second episode of Columbo was titled How to Dial a Murder and was the fourth episode of the show’s seventh season. A behavioural psychologist seeks revenge on his best friend for an affair with his wife, with the help of his well-trained dogs. In this podcast Gerry and Iain look at an episode that tests the boundaries of criminal responsibility.

Nicol Williamson stars as Dr Eric Mason, an apparently grieving widower whose wife – we learn – has recently died in an accident. Ultimately it transpires that Mrs Mason had been engaging in an extra-marital affair with Dr Charles Hunter (Joel Fabiani), ostensibly Eric’s best friend. Unaware that his secret is out, Hunter visits Mason’s home, where he is tricked into uttering a word that Mason’s dogs have been trained to respond to violently. The dogs kill Hunter, with Mason’s alibi established.

There is a small principal cast in this episode, with primary support offered by Sex and the City’s Kim Cattrall as Joanne Nicholls, a student lodging with the Masons, Tricia O’Neil as a specialist dog trainer, Frank Aletter as Mason’s physician Ernie Garrison and a young Ed Begley Jr. as the police officer charged with guarding Mason’s dogs before their scheduled destruction.

Director James Frawley returned after helming both Try and Catch Me and Make Me a Perfect Murder in Season 7 and would return for three further episodes. Writer Tom Lazarus produced a teleplay from Anthony Lawrence‘s story in the sole contribution to the series for both men.

If you have thoughts on any aspect of How to Dial a Murder, please share them below, or find us on Twitter at @columbopodcast.

How to Dial a Murder was released in 1978. It is 73 minutes long and originally aired on the NBC network. It can be viewed on Netflix in the United States and is available on DVD in other countries, including a comprehensive box set of all the show’s seasons released by Universal.