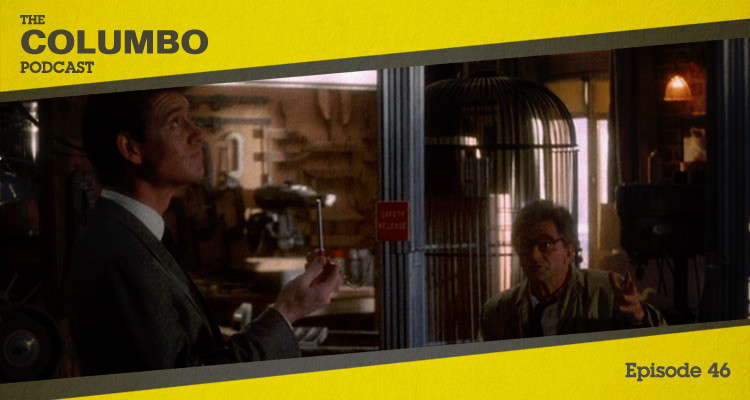 The forty fourth episode of Columbo was titled Columbo Goes to the Guillotine and was the first episode of the show’s eighth season and the first episode of its revival. A phony psychic conspires to win a government contract and kills for revenge along the way. In this podcast Gerry and Iain look at the start of Columbo’s revival and how this new episode fits in with what came before.

Peter Falk and Columbo made a long-anticipated return to the television screen in early 1989 after an 11-year hiatus. Anthony Andrews was the first actor to portray a killer in the new run, his so-called ‘psychic’, Elliott Blake, murdering Anthony Zerbe‘s Max Dyson with Dyson’s own guillotine; an act of revenge for Max’s decision to sell Elliott out to Ugandan prison authorities in exchange for an early release some years previous.

Leo Penn returned for his third and final episode as director, making this the second consecutive episode he had helmed, albeit with something of a break in-between. The story was the first of three written by William Read Woodfield, perhaps better known for penning twenty four episodes of Mission: Impossible.

During the episode we pondered how this episode was anticipated and received on release. If you have thoughts on that or on any other aspect of Columbo Goes to the Guillotine, please share them below, or find us on Twitter at @columbopodcast.

Columbo Goes to the Guillotine was released in 1989. It is 98 minutes long and originally aired on the ABC network. This episode is not available on Netflix, but can be found on the Season 8 or complete collection DVD box sets from Universal.