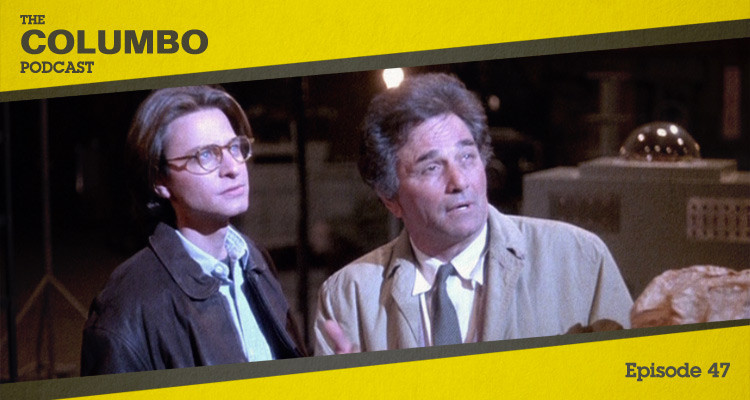 The forty fifth episode of Columbo was titled Murder, Smoke and Shadows and was the second episode of the show’s eighth season. A hotshot movie director kills his friend to protect a dreadful secret. In this podcast Gerry and Iain look at the highs and lows of this film lot investigation.

The Columbo revival continues with a return to familiar territory as the lieutenant investigates a Hollywood killing. Fisher Stevens‘ Alex Bradey is a rising star, directing feature films at a young age and building a big reputation. Leonard Fisher (Jeff Perry) threatens that when he appears with a video of his sister’s death, exposing Bradey’s role in the tragedy.

There is strong support in this episode from Nan Martin as Bradey’s veteran secretary Rose Walker and from Molly Hagan who plays the conflicted Ruth Jernigan, an actress whose relationship with Bradey is interrupted when he surreptitiously hires an actor to set her up with a co-star, in order to deliver better performances in his movie. Steven Hill‘s brief appearance as Bradey’s mentor and sponsor Mr Marosco is effective and Al Pugliese puts in a good performance as Phil Crossette – the aforementioned actor at Bradey’s personal disposal.

James Frawley directed for the fourth time, after Try and Catch Me, Make Me a Perfect Murder and How to Dial a Murder, working from Richard Alan Simmons‘ sole Columbo story (though he was involved the show’s production; in the creation of Mrs. Columbo; and was an executive producer on Peter Falk’s earlier series, The Trials of O’Brien).

If you have thoughts on any aspect of Murder, Smoke and Shadows, please share them below, or find us on Twitter at @columbopodcast.

Murder, Smoke and Shadows was released in 1989. It is 98 minutes long and originally aired on the ABC network. This episode is not available on Netflix, but can be found on the Season 8 or complete collection DVD box sets from Universal.