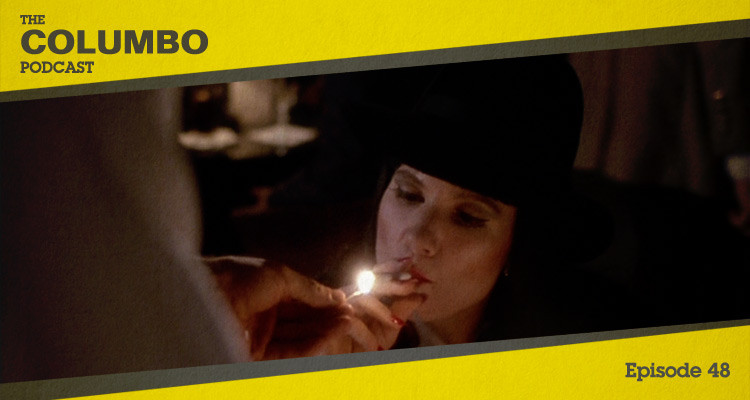 The forty sixth episode of Columbo was titled Sex and the Married Detective and was the third episode of the show’s eighth season. A sex therapist witnesses her partner engaging in an affair and kills him in revenge. In this podcast Gerry and Iain look at the subject and tone of this episode as well as the detail of the crime.

Due to the subject matter of Sex and the Married Detective, this podcast episode may not be suitable for all audiences.

Columbo arrives on the cusp of the 1990s and it shows in this stylised mystery. Sex therapist Dr Joan Allendy (Lindsay Crouse) is confident and content in her role at the Allenby Clinic, working with her boyfriend and business partner David Kincaid (played right on the line between smooth and sleazy by Stephen Macht) until she returns unexpectedly one evening to find Kincaid engaging in an affair with her assistant, Cindy (Julia Montgomery).

James Frawley‘s fifth of six stints as director, after Try and Catch Me, Make Me a Perfect Murder, How to Dial a Murder and Murder, Smoke & Mirrors, is a departure from his earlier episodes as he tries to decide whether he’s working on Columbo or Red Shoe Diaries; while Jerry Ludwig‘s script dials up the cheese factor to eleven, creating a unique feel to the episode.

During the episode we asked whether any of our listeners could remember how easy it was to buy a handgun without ID in 1989. If you have thoughts on that or any other aspect of Sex and the Married Detective, please share them below, or find us on Twitter at @columbopodcast.

Sex and the Married Detective was released in 1989. It is 98 minutes long and originally aired on the ABC network. This episode is not available on Netflix, but can be found on the Season 8 or complete collection DVD box sets from Universal.