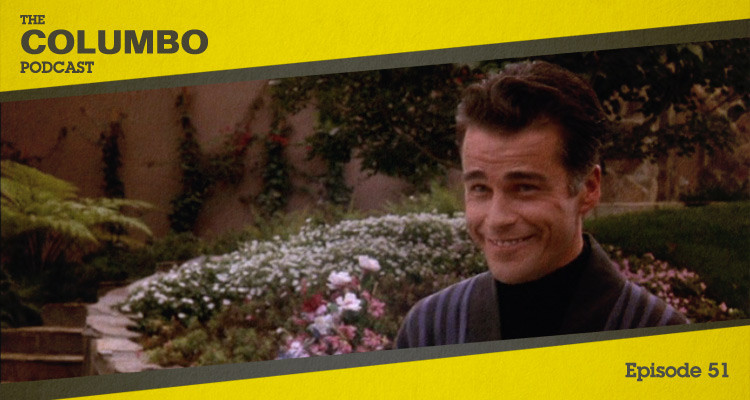 The forty ninth episode of Columbo was titled Columbo Cries Wolf and was the second episode of the show’s ninth season. A publicity-hungry pair dupe Columbo, before their plans take a fatal twist. In this podcast Gerry and Iain look at the change in format and whether it helps or harms the episode.

We are introduced to a pair of soap opera legends as Ian Buchanan‘s Sean Brantley and Deidre Hall‘s Dian Hunter take centre stage in the episode. Their elaborate plan to stage Hunter’s murder and gain publicity for their magazine goes perfectly, but with her threat to sell 51% of the business to Sir Harry Matthews (Alan Scarfe) unaffected, Brantley takes permanent action to resolve the issue.

There are a lot of ancillary characters in this episode, but the most visible are Rebecca Staab as Brantley’s lover Tina; Mark Margolis as chauffeur Cosner; and David Huddleston as the Mayor of Los Angeles. Journalist Jeanne Wolf makes a cameo appearance as herself and Bruce Kirby returns to the force in an uncredited appearance as Sergeant George Kramer (we assume!).

Director Daryl Duke took control of the first of his two Columbo episodes, working with a story by William Read Woodfield, remembered for writing Columbo Goes to the Guillotine and with one further episode to follow (yes, it also has ‘Columbo’ in the title…).

If you have thoughts on any aspect of Columbo Cries Wolf, please share them below, or find us on Twitter at @columbopodcast.

Columbo Cries Wolf was released in 1990. It is 98 minutes long and originally aired on the ABC network. This episode is not available on Netflix, but can be found on the Season 9 or complete collection DVD box sets from Universal.