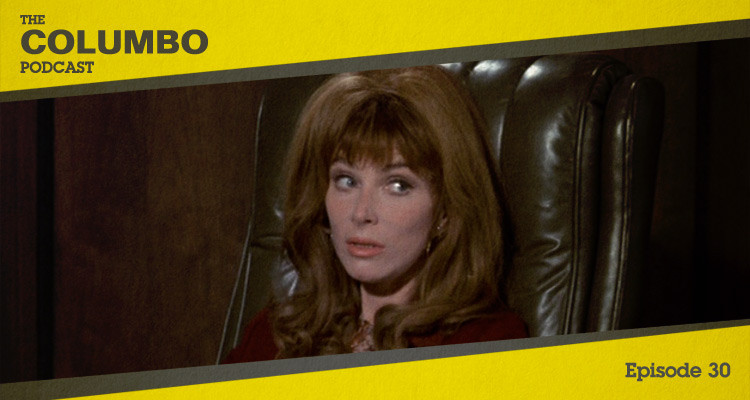 The pilot episode of Columbo was titled Ransom for a Dead Man and preceded the show’s first season. An ambitious wife disposes of her husband to take control of their assets. In this podcast Gerry and Iain look at the story of this pilot episode and its relationship to the series that followed.

The original run of Columbo spanned seven seasons. With the Columbo Podcast having reached the conclusion of Season 4 it seemed an opportune moment to produce a special episode looking back at the 1971 pilot that immediately preceded that run. Academy Award winner Lee Grant squared off against Peter Falk’s fledgeling Columbo in a 98 minute show that laid firm foundations for the series to follow.

Grant’s Leslie Williams was a lawyer, married to another – Harlan Warde‘s Paul Williams – and stepmother to Patricia Mattick‘s erratic Margaret Williams. Although the episode does not make this explicit, it seems likely that she is looking to gain unfettered control over their financial assets. She murders him and stages a fake kidnapping to cover her tracks. Margaret returns from her private school in Switzerland when her father goes missing and offers further irritation to Leslie.

Grant went on to win her Oscar in 1976, following nominations in 1952 and 1971 and ahead of a further nomination in 1977, all for the Best Actress in a Supporting Role category. Her win came for Shampoo opposite Warren Beatty, Julie Christie and Goldie Hawn and was that movie’s only success from its four Academy Award nominations.

There was a much larger group of supporting actors here than we saw once Season 1 began. From John Fink as Michael Clark, Williams’ associate at her legal practice, to Jean Byron as Pat, a tennis-playing friend to Leslie; from FBI agent Carlson (Harold Gould) to Paul Carr as Hammond, one of Carlson’s team, there were an array of talented supporting actors who helped sustain a strong show.

This was Richard Irving’s final stint behind the Columbo camera, while writer Dean Hargrove went on to be a producer and executive producer on 20 episodes of the show, between 1971 and 1975.

If you have thoughts on any aspect of Ransom for a Dead Man please share them below, or find us on Twitter at @columbopodcast.

Ransom for a Dead Man was released in 1971. It is 98 minutes long and originally aired on the NBC network. This episode is not available on Netflix, but can be found as an ‘extra’ in the Season 1 or complete collection DVD box sets from Universal.