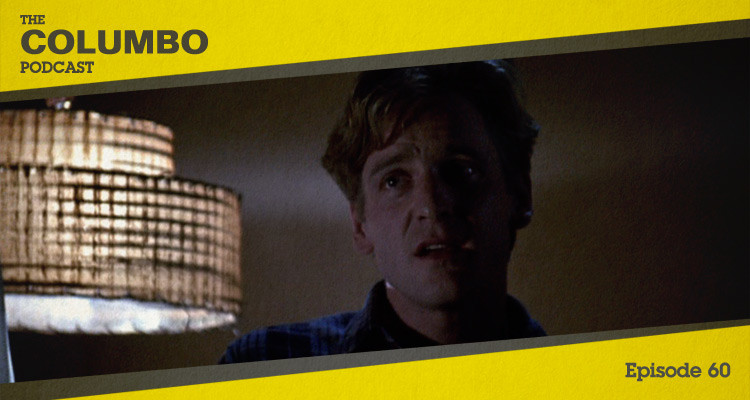 The fifty eighth episode of Columbo was titled No Time to Die and was the second episode of the show’s eleventh season. A family wedding becomes a manhunt as the bride goes missing. In this podcast Gerry and Iain look at a major departure from Columbo‘s usual format.

It is a day (and night) of celebration as Columbo’s orphan nephew, Detective Andy Parma (Thomas Calabro) of the LAPD, marries Melissa Hays (Joanna Going), daughter of the wealthy Sheldon Hays (Donald Moffat) and Louise Hays (Patricia Huston). Andy’s joy turns to anguish, however, as his bride disappears shortly after they retire to the bridal suite.

As Columbo, Parma and a group of colleagues including Sergeant Goodman (Dan Butler) and Detective Dennis Mulrooney (Doug Savant) attempt to piece together the night’s events, Melissa is being held captive by a crazed stalker, Rudy Strassa (Daniel McDonald), who intends to force her to participate in a bizarre wedding ritual before re-enacting his father’s murder of his mother and subsequent suicide.

With support from their Captain (Lance LeGault), Columbo’s crack squad move quickly to investigate and eliminate Albert Wagner (Don Swayze) on a tip off from Tubby Comfort (Cliff Emmich). Meanwhile photographer Alex Varrick (Daniel Davis) and Bailey (David Byrd), who cleans a nearby restaurant at night, provide vital clues to propel the lieutenant in the right direction.

Alan J. Levi followed up his directorial work on Uneasy Lies the Crown and Columbo and the Murder of a Rock Star with this, his third and final stint behind the show’s camera. The episode was adapted from a story by Ed McBain – a pen-name of Evan Hunter – and the teleplay was written by Robert Van Scoyk, who previously wrote Murder Under Glass and had an uncredited hand in the script for Death Hits the Jackpot.

If you have thoughts on any aspect of No Time to Die, please share them below, or find us on Twitter at @columbopodcast.

No Time to Die was released in 1992. It is 98 minutes long and originally aired on the ABC network. This episode is not available on Netflix, but can be found on the Season 10 or complete collection DVD box sets from Universal (all remaining episodes are considered ‘Season 10’ in the DVD collection).