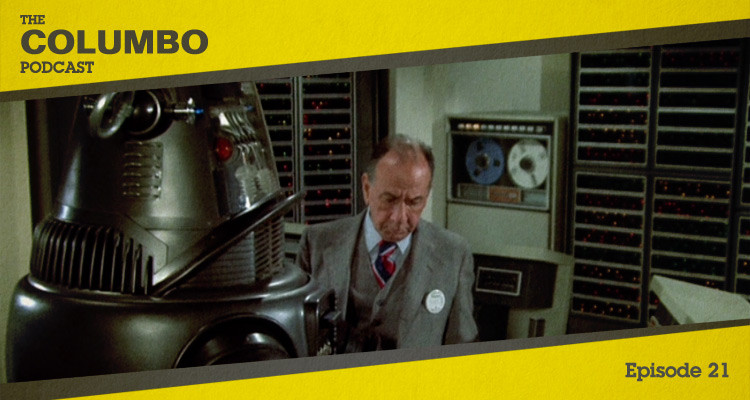 The twenty-first episode of Columbo was titled Mind over Mayhem and was the sixth episode of the show’s third season. A robotic accomplice clears the way for a genius to commit a brutal murder. In this podcast Gerry and Iain look at a battle of two great minds and analyse the crucial mistakes that set Columbo on the right track.

Oscar winners have a habit of showing up in Columbo so it is no surprise that Mind over Mayhem‘s principal villain, Dr Marshall Cahill, was portrayed by an actor with that level of recognition. Indeed, José Ferrer was a three-time Academy Award nominee, winning in 1951 for his leading role in Cyrano de Bergerac, not to be confused with the classic Channel Islands-based detective show Bergerac. Ferrer was also prominent in Lawrence of Arabia and later in his career found recognition for his performance as Padishah Emperor Shaddam IV in 1984’s Dune.

Stealing the show, arguably, were Lee Montgomery as boy genius Steve Spelberg and Robby the Robot as Cahill’s accomplice, MM7.

Alf Kjellin directed the first of his two Columbo episodes, working with legendary writer Steven Bochco, about who little more needs to be said!

Pleas add your thoughts on any aspect of Mind over Mayhem below, or find us on Twitter at @columbopodcast.

Mind over Mayhem was released in 1974. It is 73 minutes long and originally aired on the NBC network. It can be viewed on Netflix in the United States and is available on DVD in other countries, including a comprehensive box set of all eleven seasons released by Universal.