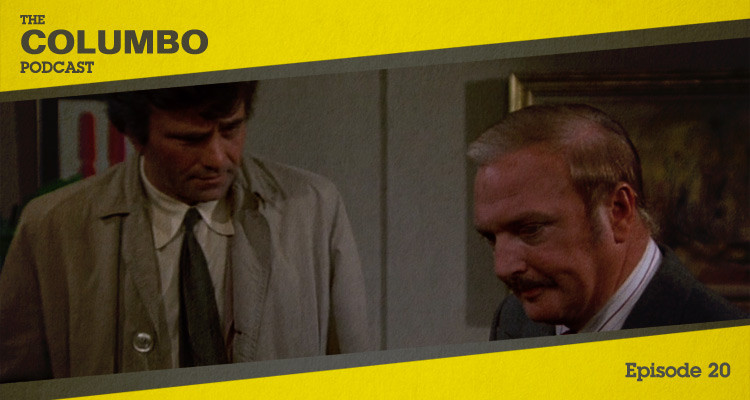 The twentieth episode of Columbo was titled Publish or Perish and was the fifth episode of the show’s third season. Self-incrimination, home-made explosives and literary rivalries make for a dramatic combination. In this podcast Gerry and Iain look between the lines for clues and mistakes that let Columbo turn the page on this mystery.

The cast of Publish or Perish is headlined by the return of Jack Cassidy as our primary antagonist, publisher Riley Greenleaf. There are parallels with Cassidy’s Columbo debut in Season 1’s opener Murder by the Book, his tête-à-tête with Peter Falk a highlight of both episodes. Cassidy was a prolific television actor in the 60s and 70s and picked up Emmy nominations for his work on the TV movie The Andersonville Trial in 1970 and on the series He & She in 1967 before appearing with Clint Eastwood in 1975’s The Eiger Sanction.

Cassidy and Falk were the focus of this episode, but there was room for John Davis Chandler to steal a couple of scenes as assassin-cum-victim Eddie Kane, while decorated author and writer Mickey Spillane guested as primary victim Alan Mallory, whose character seemed to be inspired, at least in part, by Spillane himself. Mariette Hartley as Mallory’s literary agent Eileen McRae and Jacques Aubuchon as Greenleaf’s rival publisher Jeffrey Neal added a little colour to proceedings, while Jack Bender – who would go on to find success as a director and executive producer on a number of popular shows – made a brief appearance as Wolpert, the courier for Mallory’s transcription company. Alan Fudge put in an entertaining performance as David Chase, Greenleaf’s attorney.

Fan favourites James Sikking, in an uncredited role as an LAPD cop; Maryesther Denver, as the maligned wife of Greenleaf’s car crash victim; and Ted Gehring, as the security guard in Mallory’s office building, also caught the eye in this episode.

Director Robert Butler made his second and final appearance behind the Columbo camera after helming Season 2’s Double Shock, while Peter S. Fischer was responsible for writing the first of his nine episodes (two under the pseudonym ‘Lawrence Vail’). Fischer would co on to create Murder, She Wrote, a show whish has experienced enduring success and great popularity.

We asked listeners if they could remember whether the return of Jack Cassidy was highly promoted when this episode originally aired, so add your thoughts on that or any aspect of Publish or Perish below, or find us on Twitter at @columbopodcast.

Publish or Perish was released in 1974. It is 73 minutes long and originally aired on the NBC network. It can be viewed on Netflix in the United States and is available on DVD in other countries, including a comprehensive box set of all eleven seasons released by Universal.