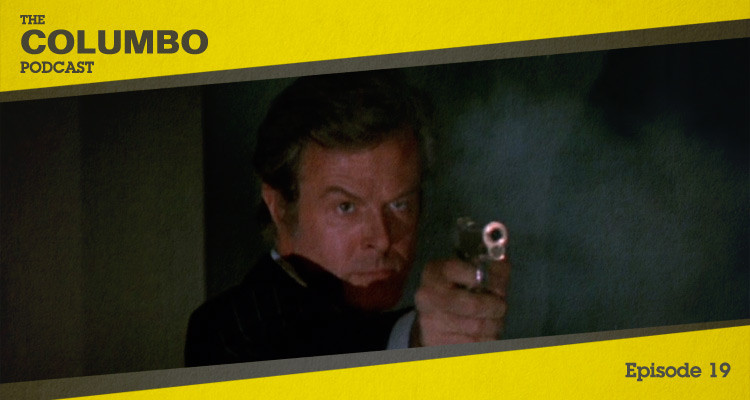 The nineteenth episode of Columbo was titled Double Exposure and was the fourth episode of the show’s third season. Subliminal messaging helps in both the commission of a murder and in solving it. In this podcast Gerry and Iain look at the overt and covert messages that lead Columbo to his killer.

Robert Culp returns for his third tour as a Columbo murderer, playing Motivational Researcher Dr. Bart Kepple. We remember Culp’s excellent performances in Season 1’s Death Lends a Hand and Season 2’s The Most Crucial Game and touched on his other career highlights in the notes for those episodes. Culp and Peter Falk dominated screen time in this episode, their sparring proving a highlight as it had been in earlier shows.

Supporting roles were played by Chuck McCann – a prolific voice actor perhaps best known for his role as Duckworth in Duck Tales – as projectionist and second victim Roger White; Robert Middleton – who appeared alongside Elvis Presley in Love Me Tender and had roles in a number of popular Westerns – as the initial murder victim Vic Norris; and by Louise Latham in a brief appearance as Norris’ wife. Latham had a 40-year career in film and television, including guest roles in major shows of the 1990s like ER and The X-Files.

Double Exposure was written by Stephen J. Cannell who would go on to create a number of hit TV shows, including The Rockford Files, Stingray and The A-Team. There is no separate credit for the teleplay, so Cannell takes full credit for this episode. Director Richard Quine returned after helming Season 2 episodes Dagger of the Mind and Requiem for a Falling Star. Quine’s most well-remembered work is in movies from the 1950s and 1960s including Bell Book and Candle and How to Murder Your Wife.

We asked listeners if they could identify the actor playing a waiter in the early part of this episode, so add your thoughts on that or any aspect of Double Exposure below, or find us on Twitter at @columbopodcast.

Double Exposure was released in 1973. It is 70 minutes long and originally aired on the NBC network. It can be viewed on Netflix in the United States and is available on DVD in other countries, including a comprehensive box set of all eleven seasons released by Universal.