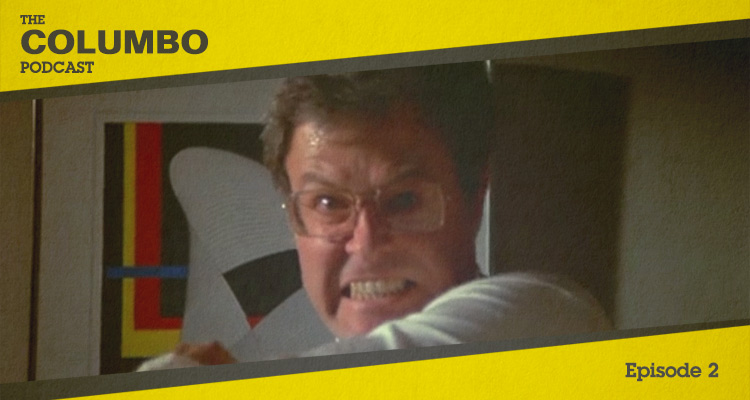 After a strong opening episode Columbo returned with a new case in Death Lends a Hand. This was the second of Season 1’s seven episodes and pitted Columbo against a private detective in a twist on the traditional relationship between killer and investigator. In this show Gerry and Iain look at the key components and moments of Death Lends a Hand.

Columbo shared centre stage in this episode with Robert Culp‘s Investigator Brimmer (first name unknown!). There was a similarly tight group of critical participants this time as there had been in Murder by the Book: Pat Crowley as the unfortunate Lenore Kennicut; Ray Milland as her widower, Arthur Kennicut and Brett Halsey as golf pro Ken Archer.

Though he doesn’t have the silver screen resumé of episode 1’s director, Steven Spielberg, Bernard Kowalski was nonetheless a prolific contributor to both Columbo and to television of the era more generally. Creators Richard Levinson and William Link were the writers of this episode – the only time in the show’s run that they are credited in this way.

During the podcast Iain promised a little more information on The Ray Milland Show. This was a sitcom which originally went by the title Meet Mr. McNutley and ran for two years on CBS. The Internet Archive has some footage from the original radio simulcast of the show’s first season, which is worth a look if you have an interest in Milland and his work.

In this episode Gerry and Iain posed a new challenge to listeners – does anybody know how many times Robert Culp made a Columbo appearance? If you think you do then please, as ever, use the comments below, or contact us on Twitter where we’re still @columbopodcast.

Death Lends a Hand was released in 1971. It is 76 minutes long and originally aired on the NBC network. It can be viewed on Netflix in the United States and is available on DVD in other countries, including a comprehensive box set of all eleven seasons released by Universal.