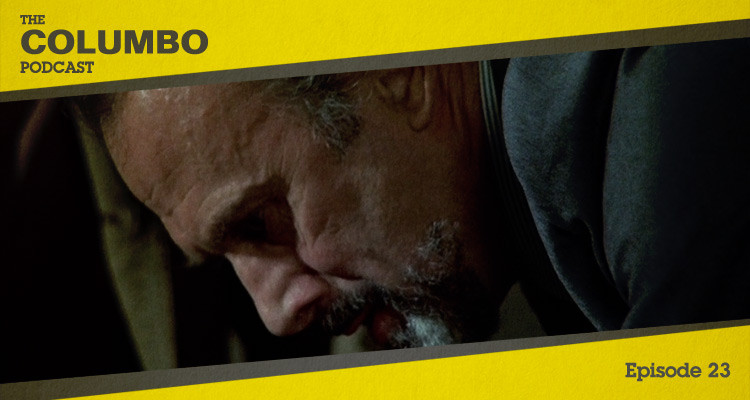 The twenty-third episode of Columbo was titled A Friend in Deed and was the eighth and final episode of the show’s third season. A police commissioner takes advantage of leverage over a friend to murder his wealthy wife. In this podcast Gerry and Iain look at the schemes and slip-ups that faced Columbo in his investigation.

The two murderers in this episode were played by Michael McGuire and Richard Kiley. McGuire’s Hugh Caldwell opens the episode having just murdered his wife and with the help of Kiley’s Supt. Mark Halperin is able to make the death look like the work of a burglar known to be operating in the area. Sensing an opportunity, Halperin murders his wife also, intending that the same perpetrator will be held responsible.

Margaret Halperin, played by Rosemary Murphy, is the second victim and a key witness in the initial investigation, while burglar Artie Jessup (a familiar face in Val Avery) may be an unsavoury sort, but he’s no killer and Columbo has leverage to ensure his co-operation, used to great effect.

The episode was directed by Ben Gazzara in the first of two turns at the helm. Gazzara would find his greatest success as an actor, nominated for multiple Emmy and Golden Globe awards – though also for two Razzies for turns in Inchon (1981) and Road House (1989) respectively! Writer Peter S. Fischer returned after his work on Publish or Perish, for the second of his nine Columbo scripts.

We asked listeners during the episode to let us know if they knew who played Janice Caldwell’s corpse. If you have thoughts on that or on any aspect of A Friend in Deed please share them below, or find us on Twitter at @columbopodcast.

A Friend in Deed was released in 1974. It is 98 minutes long and originally aired on the NBC network. It can be viewed on Netflix in the United States and is available on DVD in other countries, including a comprehensive box set of all eleven seasons released by Universal.