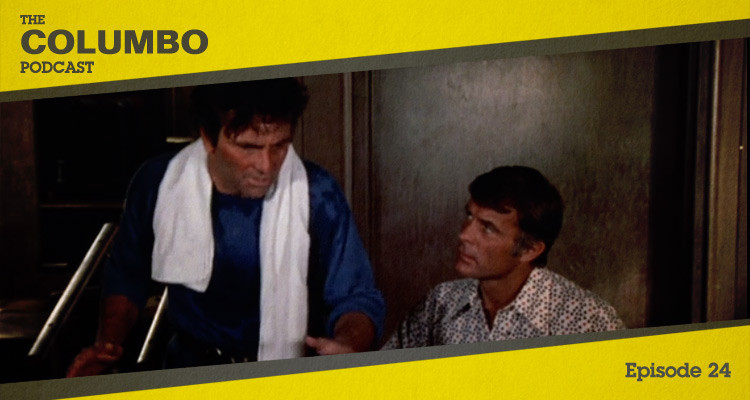 The twenty-fourth episode of Columbo was titled An Exercise in Fatality and was the first episode of the show’s fourth season. A health and fitness entrepreneur kills to prevent his dodgy dealings being exposed. In this podcast Gerry and Iain look at the leads and deductions that leave Columbo convinced the death was no accident.

The killer in An Exercise in Fatality is Milo Janus, played by Robert Conrad – perhaps best known for his work on The Wild Wild West  in the late 1960s. Janus has franchised a chain of Health Spas bearing his name, but the contracts include requirements to purchase products and services from his other companies at inflated prices. This catches the attention of Gene Stafford – depicted by Philip Bruns – who threatens to bring Janus’ little empire crashing down around his ears, with predictable consequences.

Collin Wilcox as Stafford’s widow, Ruth, and Pat Harrington as Janus’ shady business associate Buddy Castle provide strong support to Peter Falk and Conrad, but the most expanded secondary role is Janus’ secretary Jessica Conroy, played by Gretchen Corbett, who is called on both to provide an alibi for Janus and to provide Columbo with the vital link that cracks the case.

Director Bernard Kowalski returned after helming the show’s second ever episode, Death Lends a Hand. Kowalski would go on to direct two more Columbo episodes. Writer Peter S. Fischer went back-to-back with another script here, based on a story by Larry Cohen.

If you have thoughts on any aspect of An Exercise in Fatality please share them below, or find us on Twitter at @columbopodcast.

An Exercise in Fatality was released in 1974. It is 98 minutes long and originally aired on the NBC network. It can be viewed on Netflix in the United States and is available on DVD in other countries, including a comprehensive box set of all eleven seasons released by Universal.